Former vice president Joe Biden is already looking forward to making the 90-minute train ride from his home in Delaware to see former Delaware star and 2015 WNBA MVP Elena Delle Donne play for the Mystics. Biden, who made the commute between Wilmington and D.C. on a nightly basis for 36 years while serving as senator of Delaware, sent Delle Donne a letter last month after the Mystics completed a blockbuster trade for the 2016 Olympian.

Delle Donne tweeted a photo of Biden’s typed letter, which came in an envelope labeled The Vice President, on Tuesday. It reads:

Dear Elena,
Congratulations on your recent move to the Washington Mystics! I look forward to watching you play here in the District. Washington is a great city, but the best part is that it’s only a short train ride from our home state of Delaware.

Best of luck as you transition to a new city and new team. Congrats again. 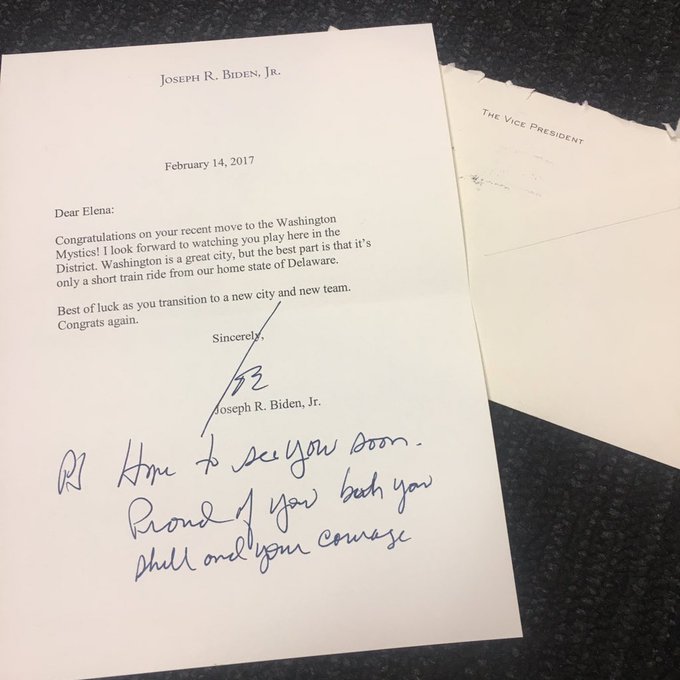 “Hope to see you soon,” Biden wrote beneath his signature. “Proud of you — both your skill and your courage.”

Delle Donne originally committed to play college basketball at U-Conn. after a decorated high school career in Wilmington, but she transferred to Delaware before her freshman year to be closer to family. Delle Donne, who battles chronic Lyme disease, spent the first four years of her WNBA career in Chicago. It was no secret this offseason that she wanted a fresh start with a team closer to home.

Biden has followed Delle Donne’s career for years. He was in the crowd when Delle Donne and Delaware defeated North Carolina in the second round of the 2013 NCAA tournament, and he wished her luck at the Rio Olympics, where the U.S. women won gold last August. Biden’s first chance to see Delle Donne in a Mystics uniform during the regular season is May 14 at Verizon Center.

In Elena Delle Donne, the Washington Mystics Finally Have Their Star